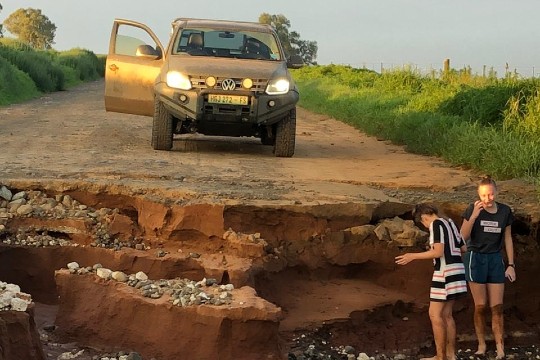 Free State Agriculture (FSA) has warned that the Free State province’s road infrastructure is in a dire state. FSA has directed an urgent letter to the Free State Department of Police, Roads and Transport
requesting urgent actions to repair roads for critical access.
This action comes as the recent flooding in the province has caused severe damage to Free State roads.

In recent years roads in the Free State have been very poorly maintained. The recent extreme downpours have resulted in many roads and bridges being washed away or rendered impassable.
This situation represents a breakdown in critical infrastructure required for continued economic activity in rural areas. Farmers will increasingly find it difficult to transport produce to markets. In
addition, the increased immobility is placing the lives and livelihoods of whole communities in danger. As an example, many poor people are not able to access medical care. Also, farm workers are finding it increasingly challenging to travel to and from work.

“Left unattended, farm dwellers such as pensioners and schoolchildren will not be able to access services (taxis have long since refused to drive on these roads) and clinics and ambulances will not
be able to access farms to deliver chronic medicine and transport critically ill patients. These are all infringements on basic human rights of our rural citizens,” said FSA President, Francois Wilken.

Wilken says farmers have already started to repair roads where critical, however we would need financial and material support to stave off further disaster. There is an urgent request for equipment
to me made available such as graders and TLB’s since the aged state yellow fleet is basically grounded due to poor maintenance. Furthermore, material such as bitumen/tar, concrete, culvert pipes and diesel for farmers’ equipment doing the repairs are needed.

According to Wilken, FSA is finalising an internal plan to try and improve the poor state of roads. If road infrastructure is left unattended FSA members will be forced to action to repair roads where access is critical. As an immediate step FSA is consulting legal and other experts on what citizens and other entities can do to start repairing roads.

In March 2019, following floods near Rouxville in Mohokare, it took three months to get the local council to declare a local disaster to unlock funding from the roads department to repair impassable
roads. Currently, nearly two years later and with a disaster declaration, these roads are still not properly repaired. With massive downpours the little gravel left on the roads would wash away
making the roads a life- threatening hazard for travellers and even more expensive to repair. Hence, FSA appeals to political heads to speed up the disaster declaration process and unlocking of
resources to assist our rural dwellers.