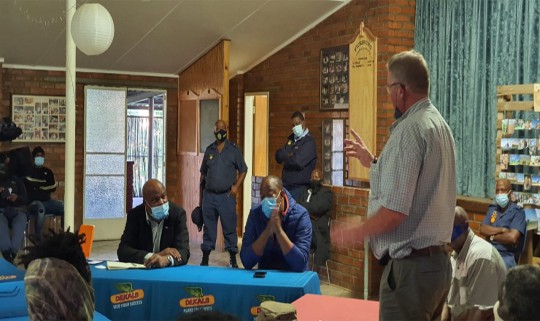 A community that protested for a common cause applied the necessary pressure and bore fruit.

Social media is still buzzing about the mere thought that farmers and taxi owners and drivers can stand together, but that is exactly what happened in Ficksburg on March 17 when ‘Sechaba sa Ficksburg’, the community forum, stood together like one man around their to show displeasure over the government’s laxity in repairing provincial roads. The forum led to a peaceful protest during which several routes in and around Ficksburg were closed with tractors, vans and taxis.

The forum includes, among others, the Ficksburg Taxi Association (FITA), the African Farmers’ Association of South Africa (AFASA), the agricultural company OVK, Setsoto Youth Development, Ficksburg Commonage Tenants, and the Ficksburg Agricultural Association. The decision to close roads through Ficksburg was taken after the forum delivered a letter to the Free State Premier, Ms Sisi Ntombela, on March 2, demanding that the Premier or MEC meet with them urgently on the state of services and infrastructure. , and especially the dire condition of the roads.

Friedl von Maltitz, regional representative of Free State Agriculture (FSA) and spokesperson for the forum, confirmed that the Free State MEC for Roads, Sam Mashinini, arrived in Ficksburg late yesterday afternoon and met with the forum. Upon request, Mashinini also rode with forum members on the Hammonia road and “he himself admitted that one cannot even call it a road,” von Maltitz said.

Von Maltitz further confirmed that the MEC had undertaken that potholes on the R26 should be repaired immediately and that the Hammonia road should be scraped next Monday to become a dirt road. It was further undertaken that Morgan Barret, chairman of Ficksburg Agricultural Association, will work with the road engineer to monitor progress, plan budget spending as well as which roads need to be repaired.

“We are grateful that the action has yielded results and hope that it can spill over into the whole province.” says von Maltitz.